China is one of the largest producer and exporter of Chemicals & Allied Products in the world. In 2013, the global market share of China reached 33% whereas its growth rate peaked at 23% from years 2005 to 2013. It remains unrivaled as growth market for the Industrial Chemical Industry.

Pick Our Brain For Free
Make Your Own Plastic Product!

Being able to penetrate China’s chemicals market is a tough task for most manufacturers who are looking to establish their own chemical products in the country. This industry report comes in handy for chemical manufacturers so they’d be able to have a grasp of the industry via statistics, charts and graphs about the chemicals market performance as of late.

Deutsche Bank released a report in 2005 on the potential of the chemical market in China. They mentioned that it was rather bullish with a forecasted annual growth of 10% over the next 10 years which is expected to achieve global chemical market share of 13%. However, this was far fetched from the prospects of China’s chemical markets. In year 2013, the global market share of China reached 33% whereas its growth rate peaked at 23% from years 2005 to 2013.

During the first 10 months in 2015, locally owned chemical companies in China managed to increase their sales by 5.6% while foreign-owned companies (excluding companies based in Taiwan, Hong Kong or Macao) experienced a decline of 6.1%. China has a forecasted global market share of 40% by year 2020 with a GDP growth rate of 6-7%-which is expected to be the main driver for global chemical demand growth. Besides this,

Previously, the chemical industry in China has been an outlet for excess chemical production. However, as depicted in the chart below there is a shift from imports to exports. Since local companies have expanded their capacities and have often focused their efforts on products for which China used to depend on imports, the country has now become a net exporter for a wide range of chemicals.

As seen below the demand for different chemicals in China have been rising. China’s demand for methanol as an alternative and “cleaner” feedstock has risen imports. There is a movement heading into Asia for methanol and petrochemicals. Another notable chemical that surged would be aromatic hydrocarbon.

With these influx in demand, it reflects China’s fast-growing import for high-quality gasoline blending components. Pater Securities AS Equity Research cited that China is by far the largest importer for organic chemicals which are mainly paraxylene, MEG, methanol, styrene and benzene, comprising around a third of the global market. In 2015, imports of China for key organic chemicals rose by 13% after a weak growth of 2% in the previous year. The sudden growth was driven by higher paraxylene and methanol imports. 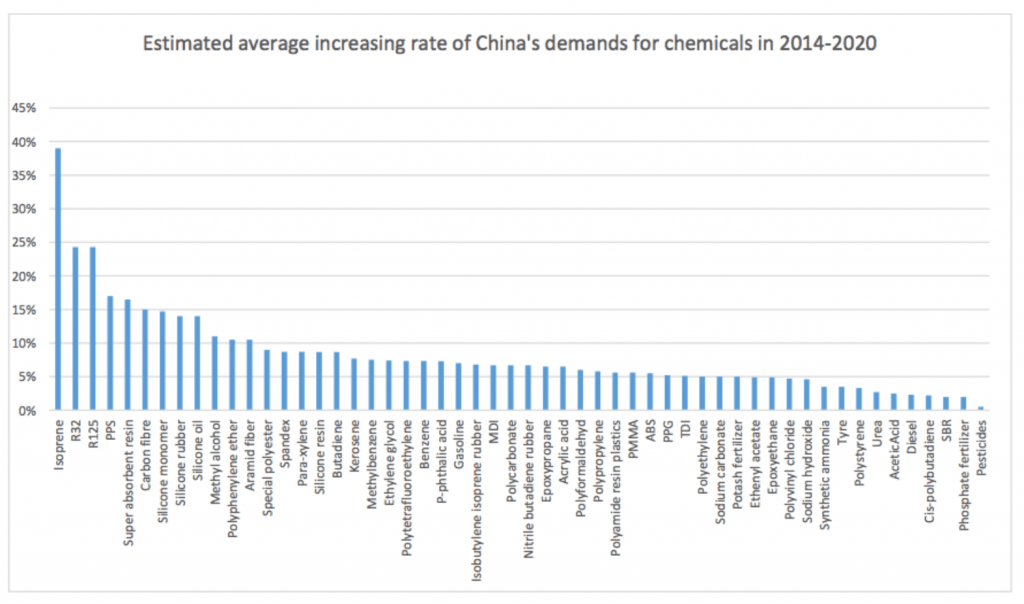 The chemical industry remains to be one of the largest and most diversified market globally, such that it is comprised of various corporations that utilizes raw materials to produce chemicals used by consumers and other industries. The value chain could be compartmentalized into four steps:

Procurement of the raw materials would be the first step for the value chain. These are usually acquired through mining, drilling, and will go through refining and gas processing. The raw materials are mainly metallic or non-metallic minerals and ores, oils and natural gas which are extracted from mining.This step includes raw material procurement, R&D, and patenting of new innovative chemicals and chemical processes. In order to obtain the petrochemicals, they undergo gas processing activities. Petrochemicals are extracted from crude oil, crude products or natural gas. They are used in manufacturing various products such as synthetic rubber, synthetic fibers, plastics, fertilizers, paints, detergents and pesticides. Other chemicals that are manufactured at this stage include olefins such as ethylene, and propylene, polyolefins and such as polyethylene and polypropylene and industrial gases.

Basic chemicals processing would be the next step in the industry value chain. In this stage, basic chemicals are produced from raw material and are therefore used by various manufactures as materials in creating a wide variety of commercial products such as dyes, detergents, chemicals for household cleaning, plastics materials, paints, drugs and fertilizers. The basic chemical processing stage encompasses synthesis, distillation, thermal cracking and polymerization. This process is closely tied with R&D activities such that products that are manufactured during this step includes intermediates such as tetrahydrofuran and hexamethylene diamine and inorganics such as ammonia.

The third stage for the chemical value chain involves the manufacturing of polymers which are primarily used to make plastics goods and constitute around 80% of the chemical industry’s production output. Polymers are the most widely used material per unit volume, even more than steel, copper and aluminum combined. They are used in products from plastic bottles to plexiglass. The polymer manufacturing process is a hybrid of batch and continuous stages hence the plants are typically larger and capital intensive.

“Feedstock” which are the raw materials for polymers are by-products of petroleum or natural gas production such as ethylene and propylene. Customers that are interested in polymers are often manufactures that transform polymers into plastic products which are sold to consumer packing companies.

This is the final stage of the value chain which includes marketing, wholesale distribution and sales of the final chemical product and allied products to other manufacturers. The manufactures in the chemical industry then transform the final product to different consumer goods and products. 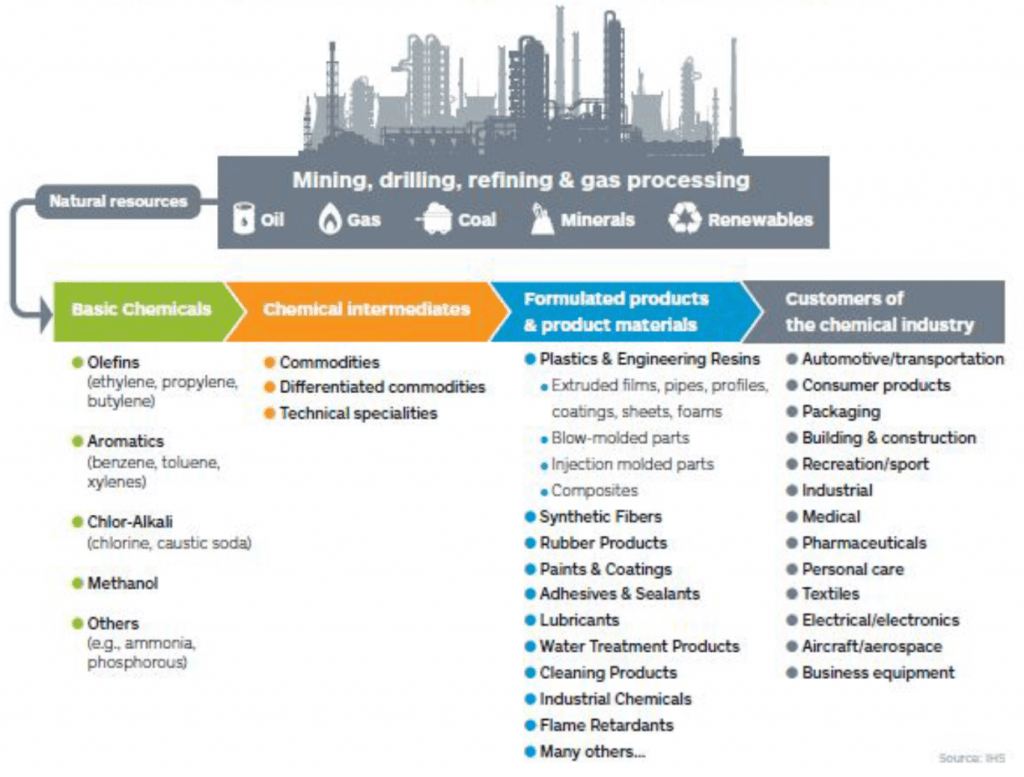 F. Importance of Logistics in the value chain

Logistics plays a critical role in the chemical industry. Since some chemicals can be hazardous, great care and precaution must be taken to ensure the safety and security during transportation. Chemical transportation should be carefully planned and controlled at each and every stage from the production facility to the end user. In order to minimize the risks, various elements should be taken into consideration such as the type of containers used for transporting, access to real-time information about the location and status of the materials. Security measures must be taken to ensure that dangerous chemicals do not get transported illegally. Logistics management and continuous improvement in operational safety and security, should remain a high priority for chemical companies.

Product Categories in the Chemical Industry in China:

Corporations under this category are engaged in manufacturing industrial organic chemicals which are not classified elsewhere. These establishments are engaged in mining, milling or otherwise preparing natural potassium, sodium or boron compounds other than common salt.

Under this category, the establishments are primarily engaged in 1) manufacturing bulk organic and inorganic medicinal chemicals and their derivatives 2) processing (grading, grinding, and milling) bulk botanical drugs and herbs. They are often involved in manufacturing agar-agar and similar products of natural origin, endocrine products, manufacturing or isolating basic vitamins, and isolating active medicinal principals such as alkaloids from botanical drugs and herbs. These corporations in the chemical industry are also engaged in producing, fabricating or processing drugs in pharmaceutical preparations for 1) pharmaceutical preparations promoted primarily to the dental, medical, or veterinary professions, and (2) pharmaceutical preparations promoted primarily to the public.The output are primarily intended for final consumption, such as ampoules, tablets, capsules, vials, ointments, medicinal powders, solutions, and suspensions.

For this specific category in the chemical industry, the enterprises are engaged in the production of paints (in paste and ready-mixed form); varnishes; lacquers; enamels and shellac; putties, wood fillers, and sealers; paint and varnish removers; paint brush cleaners; and allied paint products.

Manufacturers in the chemical industry are involved in producing nitrogenous fertilizer materials or mixed fertilizers from nitrogenous materials produced in the same establishment. Included are ammonia fertilizer compounds and anhydrous ammonia, nitric acid, ammonium nitrate, ammonium sulfate and nitrogen solutions, urea, and natural organic fertilizers (except compost) and mixtures. They are also engaged in the formulation and preparation of ready-to-use agricultural and household pest control chemicals, including insecticides, fungicides, and herbicides, from technical chemicals or concentrates; and the production of concentrates which require further processing before use as agricultural pesticides. This segment also encompasses establishments primarily engaged in manufacturing or formulating agricultural chemicals, not elsewhere classified, such as minor or trace elements and soil conditioners.